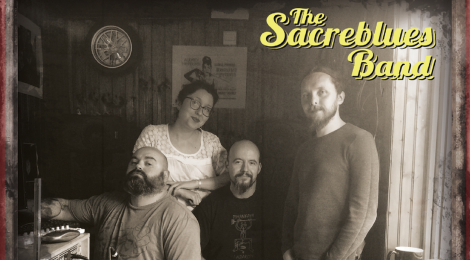 melissa / May 8, 2016 / Comments Off on Sad Reality – Album review by Jolene The Country Music Blog / Uncategorized

Some things are irresistible, such as the email I received telling me about a country-roots Americana band from Ireland and France. Given the Irish-music roots of eastern Canada, in particular, it’s not such a surprise that Americana might sprout in Ireland. But France was harder to believe – until I remembered the chanteur-auteur-compositeur tradition. Singer-songwriters – singing storytellers – are as much a part of French culture as they are of Irish or American.

Which brings us to The Sacreblues Band who in their debut album, Sad Reality, have produced something wonderful and whimsical. It synthesises all those traditions and also sounds new. The hints of lead singer Mélissa Aït Chellel’s French accent bring something fresh to this genre, and the choice of instruments used on the album nods to France while staying true to what you’d expect to find in Americana.

There are quite a few jaunty songs on this album, which collectively suggest that the band members have quite a good time – they certainly sound like they’re enjoying themselves. In a world where the stakes are so high for each song, each album, that artists have to take every moment very seriously, enjoyment can often be absent. I can count on one hand the artists I’ve seen play live who smile while they’re doing it (smiling while they’re talking between songs doesn’t count) – but it sounds like The Sacreblues Band could be added to that number. There is such lightness here – almost playfulness – that I happily listened to this album about twenty times before I remembered that I needed to review it.

Perhaps the concept of an Irish-French Americana band sounds unusual to you too. But hopefully by the time you read this you’ll be convinced that a different perspective on old traditions can be deliciously good fun, for The Sacreblues Band have made it so.